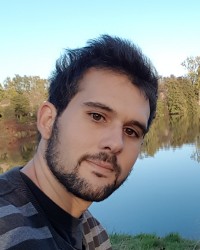 Jordy was a Research Associate in the Software Reliability Group (SRG). Jordy’s research work revolves around symbolic execution and static analysis of programs, notably working on the Chopper tool in order to automate the selection of skipped code regions. Besides that, Jordy’s research interests include abstract interpretation, binary code analysis, mathematical abstractions and (formal) proofs.

Prior to his time at SRG, Jordy has worked as a postdoc for a year in the CRIStAL labs at University of Lille, France, where he worked on OTAWA. He received his PhD in static program analysis from the University of Toulouse III, from which he holds his Master’s and two Bachelor’s degrees, in Computer Science and Pure Mathematics.

More about Jordy over at https://jruiz.fr.